Surprisingly, the biggest source of stress for correctional officers (COs) today isn’t the incarcerated individuals they work with – it’s the administrations they work for. National studies have shown that approximately 60% of staff stress comes from policies, procedures and the administrators themselves. Here are some of the reasons why. 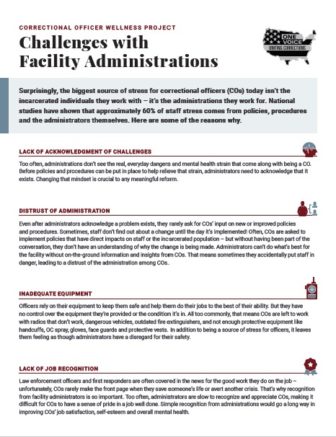 Lack of Acknowledgement of Challenges

Too often, administrations don’t see the real, everyday dangers and mental health strain that come along with being a CO. Before policies and procedures can be put in place to help relieve that strain, administrators need to acknowledge that it exists. Changing that mindset is crucial to any meaningful reform.

Even after administrators acknowledge a problem exists, they rarely ask for COs’ input on new or improved policies
and procedures. Sometimes, staff don’t find out about a change until the day it’s implemented! Often, COs are asked to implement policies that have direct impacts on staff or the incarcerated population – but without having been part of the conversation, they don’t have an understanding of why the change is being made. Administrators can’t do what’s best for the facility without on-the-ground information and insights from COs. That means sometimes they accidentally put staff in danger, leading to a distrust of the administration among COs.

Officers rely on their equipment to keep them safe and help them do their jobs to the best of their ability. But they have
no control over the equipment they’re provided or the condition it’s in. All too commonly, that means COs are left to work with radios that don’t work, dangerous vehicles, outdated fire extinguishers, and not enough protective equipment like handcuffs, OC spray, gloves, face guards and protective vests. In addition to being a source of stress for officers, it leaves them feeling as though administrators have a disregard for their safety.

Law enforcement officers and first responders are often covered in the news for the good work they do on the job – unfortunately, COs rarely make the front page when they save someone’s life or avert another crisis. That’s why recognition from facility administrators is so important. Too often, administrators are slow to recognize and appreciate COs, making it difficult for COs to have a sense of pride in a job well done. Simple recognition from administrations would go a long way in improving COs’ job satisfaction, self-esteem and overall mental health.