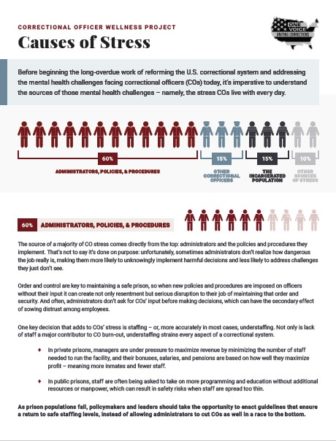 The source of a majority of CO stress comes directly from the top: administrators and the policies and procedures they implement. That’s not to say it’s done on purpose: unfortunately, sometimes administrators don’t realize how dangerous the job really is, making them more likely to unknowingly implement harmful decisions and less likely to address challenges they just don’t see.

Order and control are key to maintaining a safe prison, so when new policies and procedures are imposed on officers without their input it can create not only resentment but serious disruption to their job of maintaining that order and security. And often, administrators don’t ask for COs’ input before making decisions, which can have the secondary effect of sowing distrust among employees.

One key decision that adds to COs’ stress is staffing – or, more accurately in most cases, understaffing. Not only is lack of staff a major contributor to CO burn-out, understaffing strains every aspect of a correctional system.

As prison populations fall, policymakers and leaders should take the opportunity to enact guidelines that ensure a return to safe staffing levels, instead of allowing administrators to cut COs as well in a race to the bottom.

It’s the job of COs to maintain order within their prison, which means projecting strength and invulnerability at all times. That can be hard to shake after hours – and makes COs fearful of sharing their mental health challenges, lest they experience repercussions (like ostracization, limited assignments, and diminished opportunities) for seeking help. In the worst cases, COs may even be bullied by their peers for showing perceived weakness. A culture shift within prisons is necessary in order to alleviate CO stress and begin the process of destigmatizing seeking help.

Perhaps the most well-known source of CO stress is the incarcerated population. COs must be hyperaware of their surroundings at all times, as they are at any moment at risk of harm. That can range from being verbally threatened, to spit on, to stabbed with any number of items – including, sometimes, contaminated needles.

Even when COs want to help or mentor an incarcerated person, they are actually prohibited from doing so in many cases because of overfamiliarity rules. These rules make it difficult to establish any kind of civil relationship and trust between COs and the incarcerated population.

10% Other Sources of Stress

In addition to the more quantifiable sources, there are other more general factors that may contribute to correctional officers’ stress. COs and prisons often do not appear in the media unless it is for a negative reason, creating a wholly negative public perception of the correctional system. This also leads to a negative “Hollywood portrayal” that perpetuates the stereotype and doesn’t tell the stories of the overwhelmingly good number of COs in the field today.