The U.S. correctional system is at a breaking point. Every American touched by the system — 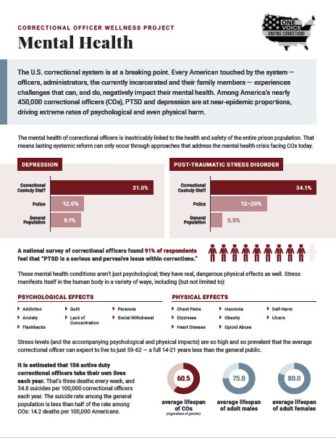 officers, administrators, the currently incarcerated and their family members — experiences challenges that can, and do, negatively impact their mental health. Among America’s nearly 450,000 correctional officers (COs), PTSD and depression are at near-epidemic proportions, driving extreme rates of psychological and even physical harm.

The mental health of correctional officers is inextricably linked to the health and safety of the entire prison population. That means lasting systemic reform can only occur through approaches that address the mental health crisis facing COs today.

A national survey of correctional officers found 91% of respondents feel that “PTSD is a serious and pervasive issue within corrections.”

These mental health conditions aren’t just psychological; they have real, dangerous physical effects as well. Stress manifests itself in the human body in a variety of ways, including (but not limited to):

Stress levels, and the accompanying psychological and physical impacts, are so high and so prevalent that the average correctional officer can expect to live to just 59-62 — a full 14-21 years less than the general public.